Boris Gloger is the founder and managing director of borisgloger consulting gmbh (Baden-Baden, Vienna). In his books, he shows the wide range of applications offered by Scrum – from product development to the management of large organizations. As the world’s first Certified Scrum trainer trained by Ken Schwaber, he has made a significant contribution to Scrum’s established as the standard of agile software development in Europe, South Africa and Brazil. He has already successfully published his practical experience in several books. 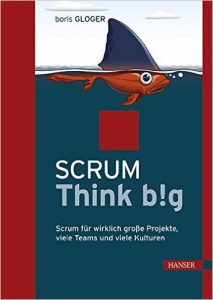 Boris Gloger is agile not only in his books, but also in his daily work. His new book “Scrum – Think b!g” was published in mid-February. The special thing about this book is that he evaluated it in short iterations together with readers and integrated their feedback early on. In the course of these feedback cycles, I met with Boris Gloger and together we approached certain areas of tension in the scaling of scrum and the digital transformation. You can read about our findings in the following article.

Does Scrum work in large projects?

The principle of agility is cooperation. Boris has therefore asked himself in his new book: “What conditions must be created for cooperation?” Especially with distributed teams and particularly complex products, it is clear that classic methods are simply not suitable for this, Boris notes.

And so it happens that corporations perform large software rollouts and then quickly realize that the software has not been optimally adapted to the requirements of the users – because not only the communication with the potential users, but also between the teams involved did not work. “Agile methods are an approach! In my work, I have always experienced that large-scale projects managed according to agile principles lead to significantly better results.” Behind Scrum, however, there are more than a few principles. Thus, according to Boris, it turned out that agile frameworks such as SAFe®, LeSS and Co. are very complicated. “Scrum, however, should be simple and get by with a few steps,” says Boris.

The digital transformation turns all companies into software companies!

Digital transformation is on everyone’s mouth and is of course also addressed in “Scrum – Think b!g”. Logically, IT was the first to be affected by digitalization. “Digitalization is the driver of agility,” says Boris, “so it is necessary to react more quickly to change than before.” In software development, Boris notes, this has already been quite successful. Scrum has fundamentally changed software development and prepared IT teams to respond quickly and flexibly to external requirements. But now digitalization is leaving IT and more or less affects all areas and industries. So now seems to be the right time to think about the role of scaling Scrum in your own company.

“I don’t want to write another book about the scrum process, but to help companies create the right framework conditions for scrum.” (Boris Gloger)

Management in crisis! Do you still need it in the scaled scrum?

“Many well-known agitators have never been top managers in large companies themselves and have therefore not been responsible for projects worth several hundred million euros. I, too, am one of them, and that is why I do not want to pass on values and mechanisms to the managers. The tools of the classic scrum, which work in small teams, are often hardly transferable to the interaction of several teams. But what Boris says is transferable are mechanisms of self-organization. He describes this with the theory that a team needs a self-reference (self-consideration), for example in the form of retrospectives, dailys and retros. Boris underlines this approach with the example of Daimler, where a paradigm shift is currently being sought using values and principles. “Dieter Zetsche uses the media specifically to convey his values to employees and to explain his goals around digital transformation.” From Boris’s point of view, it is important to establish mechanisms such as participation and the desire to work so that an agile mindset can grow. The task of the leadership is to invite and to make agility possible.

“Scrum in hardware and outside it. That’s not possible!”

When you scale scrum, you have to look beyond the confines of IT. Product development, such as hardware, requires the collaboration of specialists from a wide range of domains. When he was working on the creation of Scrum, Boris discovered that the origin of agility lies in hardware development. Hardware projects have always depended on different key players from different domains, and the challenge has always been to encourage them to think together. Supported by our own processes, efficient cooperation was made possible with the aim of bringing a good project to the market. Boris gives a good example in this context: “NASA was actually insanely agile in the 1960s. It had provided nearly 300 teams for the space project. Each team received a radio with different channels and a public channel. This made quite agile communication possible even then.” As a second example, Boris cites US General Stanley McChrystal, who was commander of the Joint Special Operations Command (JSOC) in Iraq and Afghanistan from 2003 to 2008. “At the Dailys, all 7,000 soldiers in his unit had to participate every day via videoconferencing systems. He justified this by saying that his decisions would be too slow to reach the front in critical operations. If an elite soldier has to ask the general when planning changes, it hardly works in battle.” In the dialogue we found that such special forces are probably not completely agile in their mindset, but that the work of these elite soldiers is absolutely agile and efficient. And so, from Boris’s point of view, there are many other examples in many areas that show us that agility not only works, but is very often also the most natural and sensible course of action. He recommends to the skeptics: “Try it, because it can work!”

Outlook I: Comprehensive communication and agility

“I’m grateful that there’s scrum, because that’s how I learned to work differently.” (Boris Gloger)

The pressure is mounting – on politics, in businesses, and even in families and individuals. So more agility is required, Boris said, and it is therefore absolutely necessary to finally talk more to each other. Although the markets outside are constantly changing and new requirements are being made, in many companies there are still silos and warehouses that work against rather than with each other. Boris observes that scrum has softened the fronts, at least in IT: testers and developers talk to each other and try to understand each other, and designers, back-end and front-end developers also network. Boris hopes that this development will spread to all areas and that people from different disciplines will be able to talk more intensively with a common goal in mind.

If Boris had one more wish, it would be this one: do not give up processes until you understand the principles behind them. “Let’s take a traffic light as an example. This is supposed to regulate traffic – that is a good thing! But if there is no car, why should I wait? Why can’t I disregard the process and go over the traffic lights in red?” What does Boris mean by that? This is actually quite simple: processes are still right and important. However, they should not be raised to the incontrovertible truth, but should be recommendations that do not always have to be strictly followed. We should simply follow our common sense more often.

How do you see that?

I would like to thank Boris for the great dialogue and the exciting content. If you want to know more about scaling agility, check out Boris Gloger’s book or his website. Read also my other dialogs with agile heads or my article on scaling Scrum. Have a look at the books of agile experts.

I blog about the impact of digitalization on our working environment. For this purpose, I present content from science in a practical way and show helpful tips from my everyday work. I am a manager in an SME myself and I wrote my doctoral thesis at the University of Erlangen-Nuremberg at the chair of IT Management.

How to convert the Spotify model into traditional companies?

Trends and agility in organizations – from one extreme to the next?