Increasing digitization is currently one of the greatest challenges that companies have to face. However, this now affects the entire value chain of a company, creating new forms of production and work. The feasibility in classic corporate forms of organization is controversial, but so-called new, evolutionary organizational concepts could represent a solution. In my bachelor thesis I examined the approaches of holacracy, sociocracy and democracy in order to examine their meaning in the context of companies. For this purpose, I conducted expert interviews with selected managers and employees in order to examine and compare the quality and feasibility.

The following are the results of the bachelor thesis with the topic: “Companies in transition – holacracy, sociocracy or democracy”. First I want to fundamentally define the three concepts. But this is done in a very shortened form in this blog article.

An operating system for organizations

Brian Robertson developed holacracy about 10 years ago in a small start-up company in the USA. The main sources of influence were methods from agile software development and sociocracy. In order to clarify a potential question beforehand, both the terms holocracy and holacracy are used in German literature.

For the first time, a holacracy requires a fundamentally different way of thinking and a certain understanding of human nature by its individuals within the organization. People are thinking, sensitive and creative beings who definitely need their freedom to work optimally and productively. Furthermore, there should be a strict rethink in daily work. Instead of being planned and controlled, it should now be noticed and responded to. In view of today’s volatile world, due to the growing complexity and economic instability, a constant adjustment to the current situation must be made. Strict advance planning, central control and deviations from corporate strategy are now less timely.

In a holacracy, “the distribution of power is not simply achieved by taking power from a leader and handing it over to someone else or a group. Instead, the place of power is no longer a person at the top, but a process (Robertson, 2015, p.20f.). The governance process assigns employees specific roles, which gives them specific areas of responsibility within which they can act autonomously and make decisions.

The basic organizational structure is a holarchy or a circle organization, which consists of several interconnected circles. Workers take on different roles within circles and are no longer assigned to specific departments. Each circle acts largely autonomously, with governance meetings being held in each of them to define internal structures, roles and responsibilities. In order to ensure coordination and communication between the circles, there are some roles that should fulfill this task. There are two connections in each case, namely the roles of the lead link and the rep link, which are the only ones to take part in meetings of both circles and are therefore also integrated into the decision-making process of both.

It is recommended to implement all the characteristics and principles of a holacracy in order to guarantee optimal functioning. An implementation in a certain part of a larger company can also take place first.

Sociocracy – A Further Development of Democracy?

Four basic principles that govern life and action within an organization.

Decisions are only implemented when nobody can raise justified objections. Each member is entitled to express objections, but these must have an argumentative or constructive background. Other decision-making methods, such as democratic or authoritarian, can also be used. This in turn must be first defined by a consensus decision.

Circles as the basic organizational structure

Another basic principle of sociocracy is the basic organizational structure based on circles. A circle forms a self-organized unit that is allowed to act autonomously to a certain extent in order to fulfill the goals of the respective circle. It is possible for every employee to participate in and make decisions about fundamental decisions that primarily affect daily work.

Double linking of the circles

There is a representative of a circle who takes part in the decision-making of the next higher circle. This representative is elected in the hierarchically subordinate circle. Furthermore, there is a manager who is appointed by the hierarchically superior group, e.g. the general group (Buck, 2007, p.86). The purpose of this double link is to ensure a flow of information both “bottom-up” and “top-down” within a company.

A final basic principle of a sociocratic company is that, within the circles, people are chosen for their tasks and functions by means of a vote by consent. District members define the responsibilities and qualifications that a person must fulfill in order to be able to carry out the respective task. Nominees are appointed through an open discussion and the electoral process is ended if no one has any objection to the appointment of a person for a particular task. This electoral process is intended to ensure that the elected employee has the necessary qualifications and can rely on the full support of his colleagues and also knows their expectations.

How can a democratic company be defined?

The power of the people and determining values and methods

According to the definition, the power of a democracy rests with the people. Here, however, you come across a first, fundamental problem. Who represents the people? Is it only employees with a permanent full-time contract, or so apprentices or colleagues with fixed-term contracts?

It was quite difficult to write an exact definition, as there are different forms and ideas, similar to what you can observe today in the world of politics. But I would like to briefly introduce some important principles of a democratic company:

Co-determination (in different areas of the company, management choice)

Weber defined 6 degrees of participation, three of which he describes as democratic:

Providing employees with important information, but also disclosure of salaries, for example.

Important decisions are not only made at the top management level, but also in the various departments and business areas.

Self-determination in relation to working hours

High level of commitment in organizational and personnel development

Organization of a company is not a rigid structure, but is constantly being improved. Furthermore, a special focus is placed on the further development of our own employees.

The following table should once again show some characteristics of the three concepts and simplify a possible comparison. 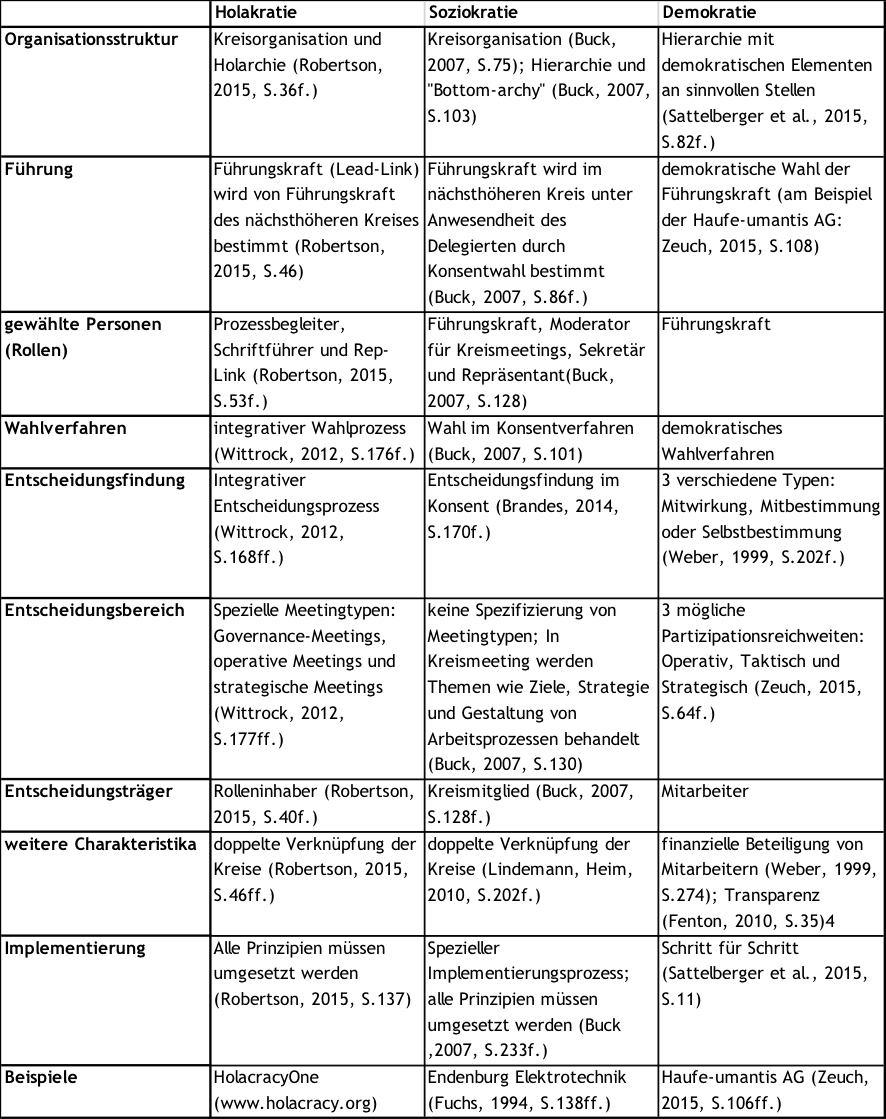 with the help of expert interviews.

Both managers and employees were identified as experts. Due to their daily work within a company organization, they have a lot of their own experience and knowledge with regard to organization, leadership and decision-making. In addition, they can very well assess what demands are made on organizational concepts today and in the future.

The assessment of feasibility and quality should be illustrated by the following figure. 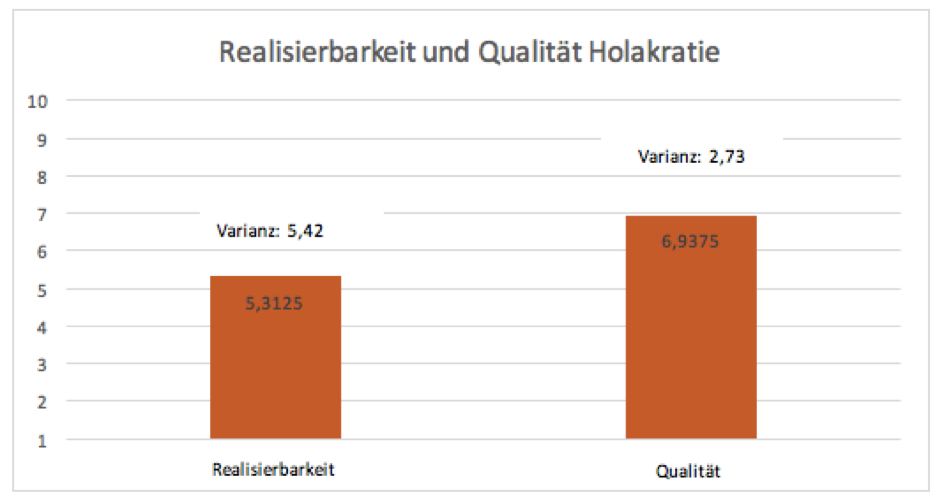 The feasibility was rated at an average of 5.31 points, with a score of ten points considering the concept to be very feasible. However, the variance at 5.42 is quite high and showed that the interviewees were very different. Important factors in the assessment were the size of the company, the degree of maturity and the sense of responsibility of the employees and their own manager or the board of directors of a company. Some experts had already had both positive and negative experiences with holacracy. The quality was estimated at 6.9 points significantly higher with a lower variance.

Problems and aspects that should be taken into account when implementing holacracy:

The quality and feasibility of sociocracy was judged very similar due to the many similarities with holacracy. 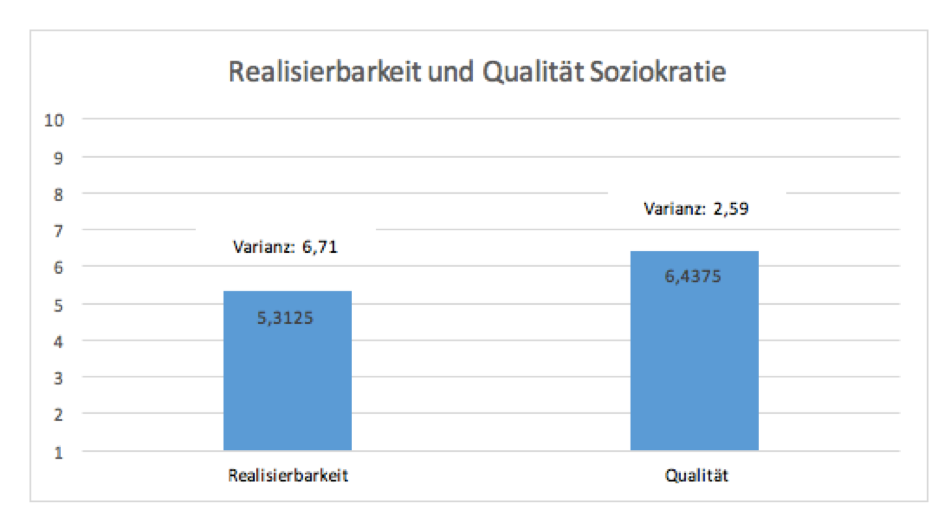 Negative aspects towards the holacracy:

Logically, the quality of sociocracy is rated at 6.44 points on average and is thus just under 0.5 points below the assessment of the Holacracy. Aspects and problems that have been explained in the practical analysis of the holacracy are also valid in a sociocratic organization.

In a final step, the feasibility and quality of democracy were analyzed in more detail using the expert interviews. 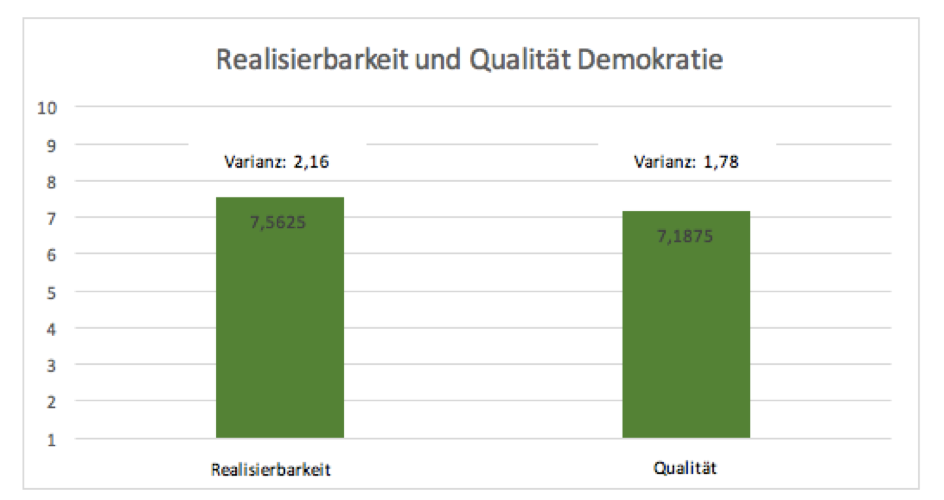 The feasibility of all three concepts is rated the highest with an average of 7.56 points. The variance is also relatively low at 2.16, as none of the interview partners assessed this concept as difficult to implement in the overall package. Rather, individual democratic elements are assessed differently and this depends, among other things, on the size of the company and the industry. Issues such as adequate transparency are more difficult to implement in larger companies than in smaller ones. Thesis, on the other hand, have greater problems, for example, in guaranteeing a profit-sharing scheme for employees, since the financial strength of these companies is significantly lower.

Problems and aspects that should be taken into account when implementing democracy:

The recapitulation shows that all 3 concepts definitely have their supporters, but there are also some critics who rate the feasibility and quality very low, especially those of the holacracy and sociocracy. Nevertheless, the interviews showed that the democratic approach in particular was viewed positively by everyone and is already highly relevant in German companies. With approx. 7 points each for the assessment of the feasibility and the quality, this concept achieved the best result. 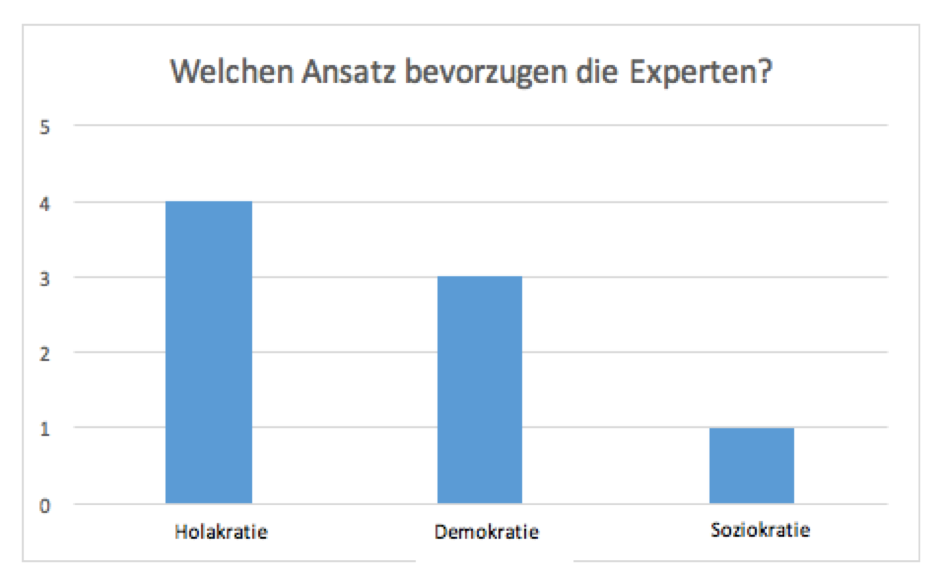 Despite all of this, there were some interviewees who named holacracy and sociocracy as the preferred concept. Since the criticism and variance of the assessments of democracy were the smallest, this figure slightly distorts the overall result.

Some companies may first have to carry out a process of democratization in order to be ready for further, more agile concepts. In addition, one last aspect, which was mentioned by experts, should still be discussed, since it affects all agile and flexible approaches equally, regardless of the concept. The corporate culture and the way people think in Germany are for the most part not yet ready for agile concepts such as holacracy or sociocracy. “Establishing more agile leadership also always means carrying out a change project that requires a cultural change”. But often this change takes place very slowly. Instead, this only happens faster if it has to, for example when companies are threatened with their financial existence. Otherwise, this change can only take place in very small steps. Nevertheless, a change towards more agility and flexibility, e.g. through self-organization, only makes sense if it fits the company and its environment.

It is difficult to predict which concept will prevail in the future. But the democratic approach in particular seems to be already integrated to some extent in many companies. Laloux described so-called future evolutionary organizations, which are characterized by self-management, wholeness and an evolutionary sense. These characteristics, in particular the breakthrough in self-management and the evolutionary sense, are less noticeable in the concept of democracy. Topics, such as the degree of participation of employees or other democratic elements, are very broadly defined and can very rarely be seen under the aspect of self-management or assigned to an evolutionary sense. Rather, the concept should be classified in the category of relationship-oriented organizations, in which empowerment of employees and decentralization are in the foreground. It could also represent an intermediate stage within the two development stages. On the other hand, the approaches of holacracy and sociocracy could turn out to be the next stage in the development of organizational forms. These concepts can only serve as a basis or inspiration and would certainly have to be adapted to future challenges and trends.

What do you think?

How to convert the Spotify model into traditional companies?

Trends and agility in organizations – from one extreme to the next?